
write for us Contact
Copyright © 2021 TexCovery. All rights reserved.

Scientists Creates Smart Textiles That Could Potentially Change The Future Of Clothing

Scientists have created flowing smart textiles that could potentially change the future of both displays and clothing, they say.

The newly created textile is like most other fabrics: it is flexible, breathable and durable, allowing it to be used for a variety of purposes. It can be washed and worn without worrying about it being destroyed or wearing out.

But it is also electronic and functions like a display. It can even be integrated with a touch-sensitive keyboard and power supply, both made of fabric, that essentially turn the fabric itself into a computer.

Researchers have been able to show how the fabric could show an interactive map, or used as a way of sending or receiving voice messages through a smartphone connected over Bluetooth.

It is made up of individual illuminated pieces that form out of conductive and glowing fibres that meet at contact points within the fabric.

Even when the textile went through 1,000 cycles of bending, stretching and pressing, most of the units still remained as stable displays, the researchers say. Scientists also put the fabric through 100 cycles of washing an drying, and the fabric kept glowing as before.

Scientists have previously been able to make textiles that are able to perform a range of smart functions, such as sensing or supplying electricity.

But the new fabric represents a breakthrough because it is the first time a textile has been able to include a large and functioning display that both withstand being worn and can be easily integrated into clothing.

The piece of textile made by the researchers is 6 metres long and 25 centimetres wide, and the display is consistent right across as well as being able to last like traditional textiles, the researchers say. 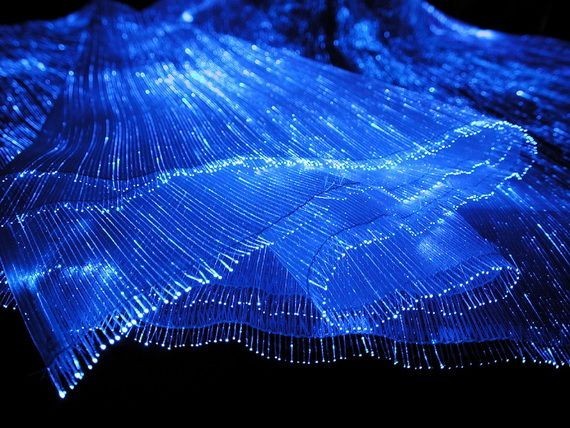 The primary use that the researchers demonstrated the technology for was in healthcare, and allowing people who might otherwise find it difficult to communicate to do so through their clothes. They showed how the fabric could be connected to signals from the brain, which could be analyzed to understand how a person is feeling and then communicated on the front of their clothes.

But it is not hard to imagine how the fabric could be used for more aesthetic purposes, too, with a range of companies already attempting to integrate technology into their clothing.

A paper describing the research, ‘Large-area display textiles integrated with functional systems’, is published in the journal Nature today.